Thanks to the many people who submitted the news.

April 20, 2005 English Trailer for "Howl's Moving Castle"
The official English site isn't ready but Ain't It Cool News has links to the trailer in various formats and sizes.

Thanks to John Blackburne and Bob for posting the news to the MML.

Thanks to Daniel Zelter for the news.

April 15, 2005 Second Interview with Cindy and Don Hewitt
Team Ghiblink has set up another email interview with Cindy and Don Hewitt, the couple who do the final "shooting script" for the English dubs of most of the Ghibli films (Spirited Away, Nausicaa, Porco, Cat Returns, Pom Poko, Totoro, Howl's Moving Castle, etc.) So we need your help. If you have questions about the new dubs just out, the dubs coming out later this year, or the US release of Howl (or even questions about Spirited Away) please send them to: nausicaa.net.interview@gmail.com

We will take all the questions we receive by midnight (central time) Sunday evening April 24 and send them to them. As with the last interview, they will have to run their answers past Disney, so we can't guarantee that all the questions will be answered. You can read the first interview to see what sort of questions they answered last time.

April 15, 2005 "Totoro" House In Great Demand
The replica of Mei and Satsuki's house from My Neighbor Totoro is involved in a tug-of-war as several cities want to host the building after the conclusion of Expo 2005. This article from The Yomiuri Shimbun explains:

----
The association spent 300 million yen to build and furnish the house. As the expo site has to be returned to its pre-expo condition, all event facilities have to be demolished or removed after the expo closes on Sept. 25.
----

One of the cities vying for the house is Tokorozawa (where Miyazaki lives) who wrote in to make their case:

----
We, the citizens of Tokorozawa, are making an attempt to bring this house back to our city, the hometown of TOTORO. Therefore we are currently subscribing a petition, and we need your support. I think many of the worldwide fans of TOTORO would agree that the house should be relocated where it really belongs.

We believe that the house will deliver the significant messages to the children and everyone on the Earth in the years to come. The movie is trying to convey the importance of the family ties, keeping a world of fantasy in the eyes of children even after growing up, and paying homage to the wisdom of nature.
----

Thanks to Mitch Hollander, good_time_jp, and Meg from the Tokorozawa Junior Chamber for the news.

April 15, 2005 Mid-April News Roundup
The USA/Canada poster for Howl's Moving Castle wound its way onto the internet starting at Dark Horizons and eventually making its way to our Posters Around the World page. We're always looking for more countries so please let us know about other versions.

A placeholder for the offical Disney homepage of Howl's Moving Castle can be found here.

The Cat Returns will be released in UK theaters on 27 May according to SFX magazine.

UltimateDisney.com has a table outlining the release status of the films in the Disney/Tokuma Deal.

Thanks to Grace Miao, Iain K. Robbins, Fil, Caseyfan, and Emmanuel for the news.

He was one of the only two Japanese in this year's list (the other was the next president of Toyota).

Thanks to Rodrigo Campos Lim, ajnrules, and good_time_jp for the news

April 8, 2005 "Nausicaa" Appearing in Theater Promotions
A confirmation of the film's arrival on the big screen this summer in the US comes from a theater in Tallahassee courtesy of Kev: 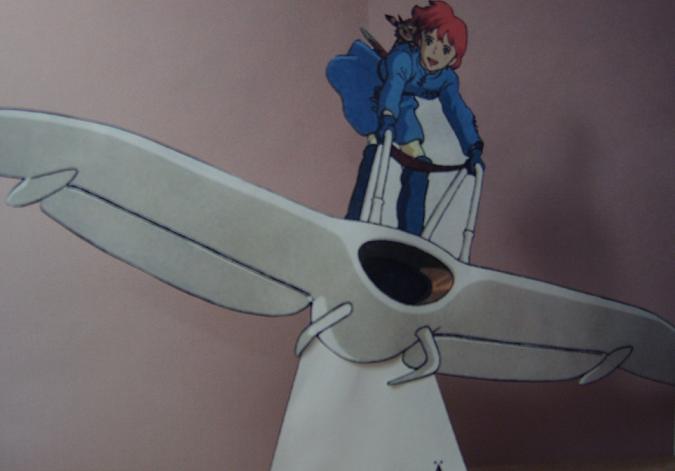 The display is around 7 feet tall and 10 feet wide.


April 8, 2005 Chinese Project Perhaps Miyazaki's Last Big Project
OnlineGhibli.com has translated an interview from Southeast Express (in Chinese) with the author of "Wo Diushile Wode Xiaonanhai (I Lost My Little Boy)". A small clip:

----
Q: How is the current progress? When will the final result be arrived at?

A: Pretty good! We had some in-depth discussions on the format of presentation and the settings of the characters. Miyazaki may come to China in June. This is a great secret! At that time we will have face-to-face discussions to make final decisions on his last piece of work, "I Lost my Little Boy." Probably by June we will make an announcement for the anime and manga fans all over the world.

This goes against the comments made by Studio Ghibli producer Toshio Suzuki in this news article.

Miyazaki has retired and un-retired several times in the past so take the article with a grain of salt.

April 8, 2005 "Yamadas" Receives PG Rating
The backlog of Studio Ghibli films in the Disney/Tokuma Deal continues to unclog as UltimateDisney.com is reporting that My Neighbors the Yamadas has received a PG rating for "mild thematic elements".

They also speculate about another set of R1 DVDs releases before the end of 2005, but which films will be included remains a mystery.

Thanks to Patrick Phutthavong for the news.

April 5, 2005 Unconfirmed Reports of Next Studio Ghibli Project Plus Bonus Takahata Details
From the Nanjing Morning Post via OnlineGhibli.com:

----
Studio Ghibli has decided that the next feature movie project would be an adaptation of a children novel called "Wo diushile wode xiaonanhai (I Lost my Little Boy)," a new piece of work by a Chinese writer called Yishu. It is estimated that the new movie will be released in 2006. This recently published story has less than 50000 words, but soon topped various best-seller lists as soon as it was released. Different from the previous works of Yishu, this story was written in "children language," and is mainly about a boy suffering from heart disease, called Mimi, and his strange but heartwarming voyages. After leaving his friends, Mimi meets various interesting characters like a mysterious elf.

What attracted the studio is the innocence of the story. It is said that the new project has already been entered into the schedule.

NOTE: there is no official news from Japan regarding this project, and there is no guarantee of the reliability of the news in Nanjing Morning Post.
----
In other news NTV aired an interview of Mr. Suzuki to promote his newly published book this morning. In the interview, he announced that three projects are going on right now: one by Miyazaki, one by Takahata, and one based on a foreign book. He used a word "Youmono," which usually means "Western," so it's unknown if this means the Chinese book reported above.

The projects are still in planning stage, and he said that one of them will be coming out. A NTV reporter said that Miyazaki's and Takahata's might be released together.